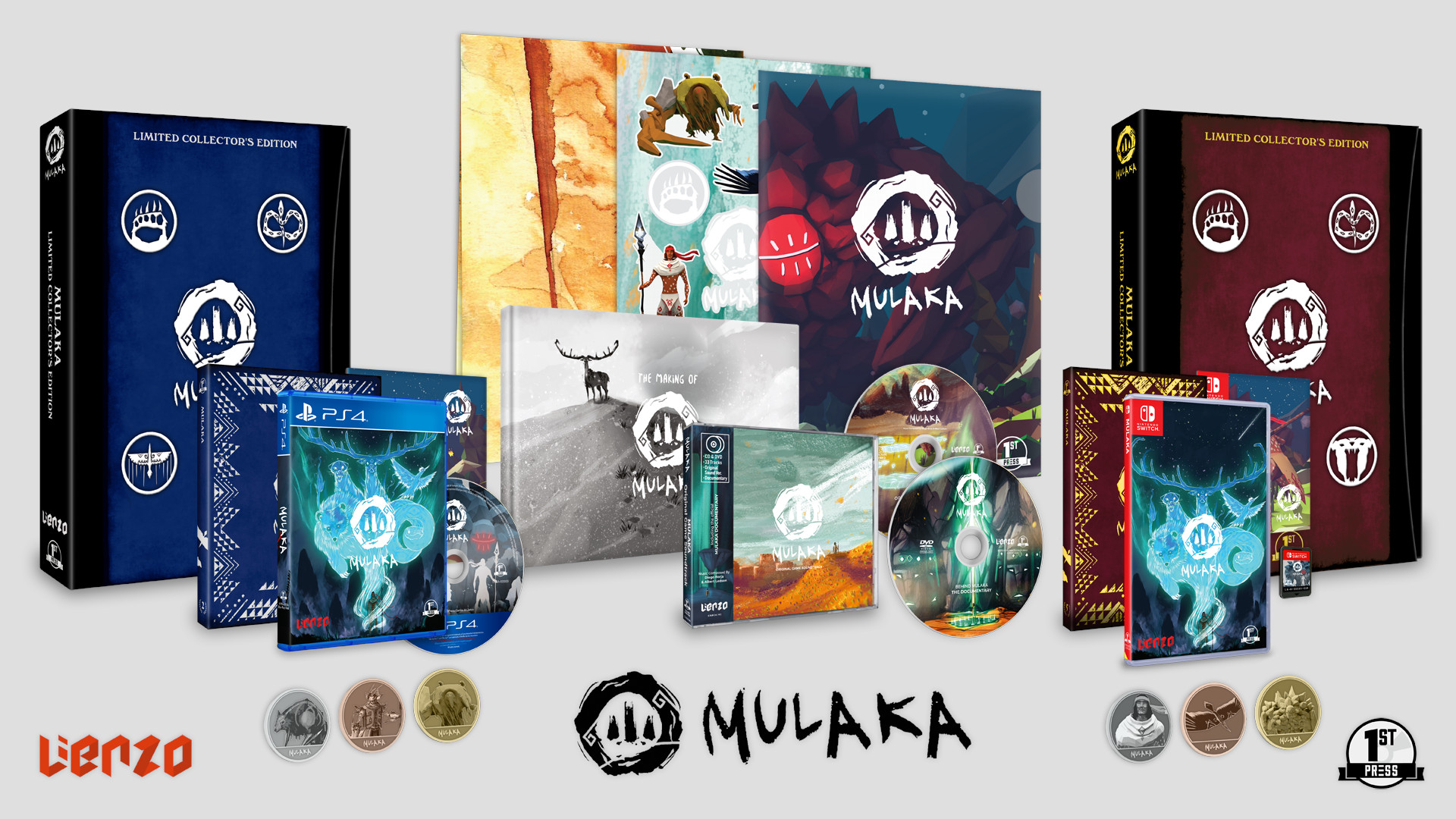 Not a week goes by without people asking us about Mulaka’s Physical Edition. And we are overjoyed to announce that the time has come, the details are all here and even better than that – Preorders – will go live tomorrow, May 2nd 2020!

Here, we will finally reveal the full designs and features of Mulaka’s physical release. We are certain Mulaka’s Collector’s Edition will surely get you excited!

About the Physical Edition

Being one of the most unique Action-Adventure games of recent years, a physical release of Mulaka has been highly anticipated among fans of the genre. The game will now finally be available for preorder on Saturday, May 2nd, 2020, with an updated estimated release of July 2020.

This also means that the full product designs are unveiled for the first time, with a Collector’s Edition that highlights the incredible teamwork and cultural dedication that went into developing the game. Furthermore, the game itself features some exclusive changes in the physical version:

For 2020, Lienzo has teamed up with German-based publisher First Press Games to finally give Mulaka the physical release it deserves.

Mulaka’s physical release will come in two unique presentations for both the PlayStation 4 and Nintendo Switch versions. A standard Regular Edition and a dedicated Collector’s Edition.

Each Edition comes with the following extras:

In addition of those above, the Collector’s Edition offers a variety of additional extras:

– A hardcover reprint of the book “Making Mulaka” by Select Start Press, with over 120 pages, telling the story behind making the game and every obstacle that Lienzo faced during the development of Mulaka, from it’s birth to launch day. This reprint doubles as an artbook, with conceptual art never before seen.
– The game’s Original Soundtrack on CD
– A filmed mini-documentary series about the cultural inspirations behind the game on DVD
– Clear files with print extras: A2 poster, a sticker set, alternate cover sheets & more

This is a limited quantity run, Mulaka Physical Edition will be available only while stock lasts. You can find all edition exclusively at the First Press Games Store.

The game is a love-letter to Action-Adventure classics such as The Legend of Zelda & God of War, while bringing a unique setting and new gameplay ideas to the table:

Dive into northern Mexico’s breathtaking landscapes with Mulaka, a 3D action-adventure game based on the rich indigenous culture of the Tarahumara.
Renowned for their impressive running abilities, embark on the journey of a Sukuruame – a Tarahumara shaman – as you fight back the foulness corrupting the land, while drawing upon the powers of demigods.
From solving puzzles in environments inspired by real Sierra Tarahumara locations, to heated hand-to-hand combat with creatures pulled from the region’s mythology, find out why the Tarahumara have earned a reputation for being superhumans.

– Become the legend: Harness the renowned athletic talents of the Tarahumara as you engage in fast-paced platforming and hand-to-hand combat.
– Explore Sierra Tarahumara: Traverse a 3D world inspired by the legendary, real-life landscapes of northern Mexico, rendered in a vibrant, low-poly visual style.
– Based on real mythology: Draw upon the powers of demigods and battle fearsome creatures pulled from the rich lore of the Tarahumara people.
– Live the culture: From narration in their indigenous language, to music unique to the region, experience an authentic representation of Tarahumara culture.
– Mix up your gameplay: Leverage the Tarahumara’s physical prowess, demigod transformations, puzzle-solving and the crafting of magic potions as you save humanity from the corruption plaguing it.
– Set off to an epic journey: Over 12 hours of gameplay, with even more for those that seek to clear all sidequests and find all secrets.

Lienzo is a video game development studio located in Chihuahua, Mexico. We create experiences that are up to the quality standard of this creative international industry. We know that video games are the ultimate medium for storytelling and we strive to leave a mark in the lives of gamers. We released the 2D Metroidvania Hunter’s Legacy in 2016 and the 3D Action Adventure Mulaka in 2018 and are currently working on our next big release.

First Press Games is a Germany-based publisher focusing on physical releases for old and new consoles.
They are helping indie game-studios and publishers with focus on digital releases to realize dedicated physical editions for their publications. Their goal is to preserve awesome digital-only titles and bring back the features that used to make physical videogames so magical. Visit their website to see some of their previous physical releases.

To our press contacts

If you have questions, feedback, or other requests regarding this release, please don’t hesitate to contact either us, or our physical publisher via:

Includes text-only version of above, screenshots, product images and more:

We appreciate your patience, and we are eternally grateful for your support.

On behalf of everyone at Lienzo,